How Likely Are You to Get in a Car Accident in Georgia?

Georgia drivers are estimated to get in a car crash every ten years on average. Accidents are bound to happen.

Some of the most important highways that connect the country cross through the state, such as Interstate-75 and Interstate-85, so it is no surprise that so many accidents occur.

In 2020, regardless of a COVID-19 shutdown and fewer people on the roads, the number of accidents increased from the previous year. The main factor is speeding. Fewer cars on the road, gave way for other drivers to find opportunities to speed, leading to an increase in fatal crashes. The number of people who died on Georgia state highways in 2020 reached 1,600.

The Georgia Department of Public Health reports that Georgia had the 4th greatest number of traffic fatalities in the nation in 2017, even though Georgia has the 8th largest population in the country.

That same year, motor vehicle traffic deaths were the leading cause of injury deaths for children and adults ages 5 – 24, and adults 55-64.

The following statistics are from the Georgia Department of Transportation Crash Analysis, Statistics, and Information Notebook regarding accidents in the state as a whole.

According to the latest report from 2019, the following are the top 10 counties with the highest number of crash fatalities in Georgia.

The Georgia Governor’s Office of Highway Safety reported that in 2019, alcohol was the leading cause of traffic fatalities in the state, followed by speeding. In nearly 16% of all traffic fatalities, pedestrians were involved, and 11% were motorcyclists.

The majority of vehicles involved in fatal crashes were passenger cars, followed far behind by pickups and utility vehicles.

Have You Been in a Car Accident?

Don’t handle the situation alone. Let our expert personal injury attorneys help you. There is no cost to you. Through a free consultation, you and the attorney can talk about your case and navigate strategies to get you the compensation you deserve. 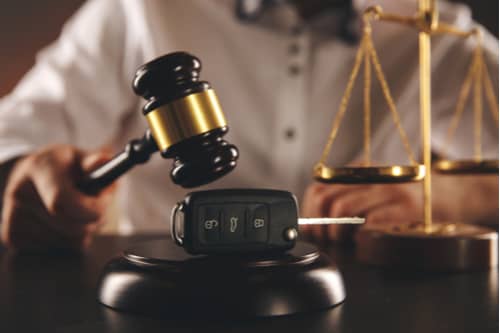 How Likely Are You to Get in a Car Accident in Georgia?

What Should You Do After a Truck Accident?